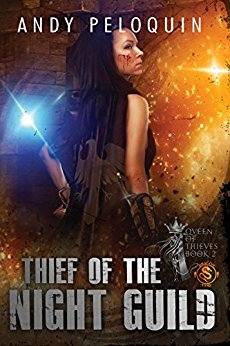 Rarely have I come across a book, a series, written so eloquently, full of passion, joy, trauma, adventure, determination, and a will to succeed above anything else. What does one write after reading such perfection? Thief of the Night Guild (Queen of Thieves #2) is a perfect rendition of the exact manner in which one should write a fantasy novel.

In book one, Child of the Night Guild, I was so traumatized by the happenings of a little girl known as “7” who is later named Ilanna. Ilanna was determined to prove herself worthy of being one of the apprentices of House Hawk. After reading book one, I was convinced it was the best novel I’d ever read. Until I read book two, Thief of the Night Guild.

Ilanna wants to buy her freedom from the Guild, but can she survive a monumental task she sets for herself? One that no one before her has ever accomplished? Read on to be led on the adventures of a lifetime.

My fingers could not turn the pages fast enough while reading Thief of the Night Guild. Seriously, I WATCHED this book play out before me .. like reading a movie. Speaking of movies, both books thus far in this series should be movies. Imagine a series with similarities to The Divergent Series, or The Hunger Games Series. To me, better than Game of Thrones, and comparable to Lord of The Rings. I highly recommend this phenomenal series by Andy Peloquin. If you’re looking for romance or erotica, move on, but if you want that something DIFFERENT, exciting, heart wrenching, and full of speed, look no further. This book is for you.

Preorder Thief of the Night Guild on Amazon now.

~Have You Heard? Book Blog

One thought on “Have You Heard About Thief of the Night Guild by Andy Peloquin? Coming Soon! ARC Review.”